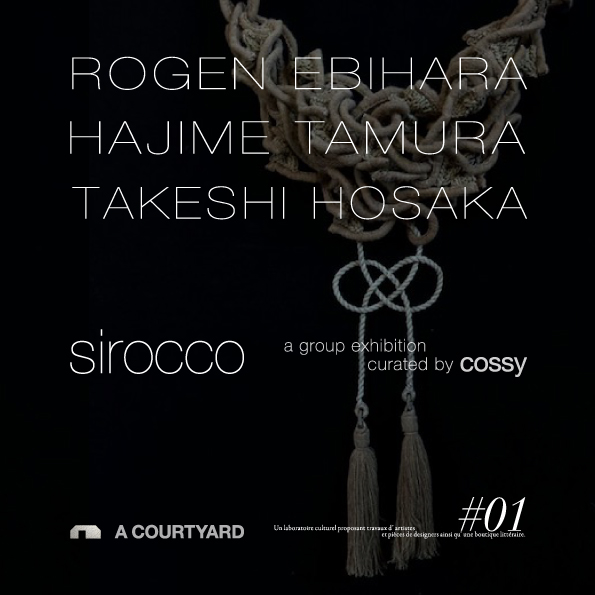 A COURTYARD has started holding an exhibition “sirocco”, curated by fashion stylist Fumiko Koshimizu (a.k.a. cossy).

Sirocco is a storm that comes from the Sahara and reaches hurricane speeds in North Africa and Southern Europe, especially during the summer season. While passing over the Mediterranean Sea, the sirocco picks up moisture and causes rainfall in the southern part of Italy and France.

Although it is regarded as a troublesome winds in the local, we venture to chose this word as the title at the exhibition this time.

Recently, the era we live has been called as “The Age of Wind Energy” by western astrology . In fact, by experiencing the COVID-19 pandemic, we have changed our living in an increasingly diverse set of values, outlooks on life, and the transformation of aesthetic sense.

A COURTYARD is a small venue, and it has been modestly opened  in the silence of Unno-juku, which retains a rare landscape in Japan. We hope that guests visit this Kaido-street tastes the silence, breeze and atmosphere of “sirocco”.

At this exhibition, the following calligraphers, potters, and accessory designer has been exhibiting and selling the works of the following three artists. We hope that you will taste  calmly blows “sirocco”, the wind that each talent overlaps and weaves like a counterpoint.

Born in Tochigi prefecture in 1961. Calligrapher/Ink artist. Started his artistic activity at the age of four. After studying at the Japanese Calligraphy College, he searched after by himself the path of calligraphy and figured out his original creative way. His works have been collected in the Canadian History Museum, the Embassy of Japan in France, Daemyung Temple (China), Shaanxi History Museum (China), the Italian Embassy in Japan (Tokyo), and Hotel Gajoen Tokyo. He also has held many exhibitions and performances in Japan and abroad. In 2020, he held an exhibition “The World of Ink of Rogen Ebihara” at Gora Kadan (Hakone, Kanagawa). He also presides over by “SHOGEN no Kai” Academy.

Born in Akita prefecture in 1973. After graduating from Waseda University Graduate School, started his artistic activity in Tokyo. He then produced in 2002 by moving the base to Mashiko Town, Tochigi Prefecture. Since 2011, he has been presenting his works in solo and group exhibitions while working energetically to make pottery in his hometown of Akita Prefecture.

Born in Akita City in 1988. Graduated from Akita Public Arts and Crafts Junior College, Department of Crafts and Arts in 2009. He then,  searched and explored after by himself the path of handicraft modeling techniques such as dyeing, sewing, and knitting. Using materials made from fibers, he creates works with the motif of the texture of living things and inanimate objects. Based on the ecology of motifs such as stalls with fur motifs, accessories with bone motifs, and wall works with sessile organisms as motifs, works are created by trial and error in handling textile materials.

Fashion stylist. She has been active mainly in TV and advertising media.

Recently, she has expanded her activities such as Abema TV(Japan’s Internet TV network), and also does costume production for artists under the unit name as Toko Manganji.